This Is Just to Say

and which
you expressly asked
me
not to touch

I have clogged
the sink
that is in
the kitchen

and which
you requested
I not use
to rinse my silkscreens

I have restarted
the PlayStation
that was in
your room

I have given away
the key
that was under
the planter

and which
you said
my girlfriend
couldn’t have

Itzhak Perlman: Vote "No" on Proposition 8

Posted by Emily Lloyd at 2:58 PM No comments:

The Observer has posted a list of the[ir] 50 Greatest Arts Videos on YouTube, among them Zora Neale Hurston singing "Uncle Bud" in 1939 (click to view; embedding option disabled for these videos), Madonna's first stage performance as a recording artist, and Marlon Brando's screen test for Rebel Without A Cause. Many of the post's commenters add links to their own favorite arts videos.

I know I sound like a naif, but YouTube still blows me away. I never could have imagined I'd get to see a scene from the 20th century theatre event I most wish I'd witnessed: the 20-yr-old Orson Welles's all-black "Voodoo Macbeth" from 1936 (not on The Observer's list, but on mine). Scene begins after newsreel-ish bit:


Of less historical interest, but sweet and sad: an affable, genuine Welles at 70 being interviewed by Merv Griffin. He died two hours after the interview was taped.


One more. Welles was a magician and fascinated by all kinds of fakery and sleight-of-hand. In this short clip, he describes his one-day stint as a successful fortune teller:

Posted by Emily Lloyd at 8:39 AM No comments: 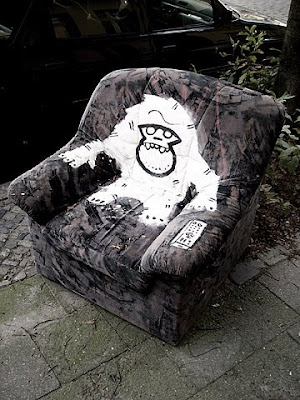 Reclaim Your City is a "streetart picture archive from berlin."
Posted by Emily Lloyd at 7:56 AM No comments:

It's good to see Aravind Adiga's The White Tiger win the Booker. Adiga's Balram Halwai is the most seductive and compelling first-person narrator I've read in a while. Always nice when a big prize doesn't go to a bland book.

I've been listening to the new Dar Williams. I haven't found another "Iowa" or "The Ocean," but her version of the sublime "Midnight Radio" from Hedwig and the Angry Inch is lovely. I'm glad she decided to cover it. Someone posted a video of her performing it live to YouTube:

Posted by Emily Lloyd at 8:58 AM No comments:

Living With Music: a Playlist by Camille Paglia

I'm bad with saving items in my feed reader "to read later" and then letting months slip by, so it's only now I clicked through to read Living With Music: a Playlist by Camille Paglia, originally posted to the NY Times Papercuts blog in July. I've pasted it below in its entirety. Is the lickin’ stick an antebellum whip or melting phallic candy? Good ol' Camille. I'd know that voice anywhere. Have to admit I adore the Bangles cover of "Hazy Shade of Winter," too.


) Train Kept A-Rollin’, The Yardbirds (1965). An addictive London Mod rave-up epitomizing the accelerating mania of the 1960s, which finally self-destructed. Based on a 1951 song by an African-American musician, Tiny Bradshaw.

2) Ballad of a Thin Man, Bob Dylan (1965). Sinister atmospherics of the garish sexual underground in the repressive pre-Stonewall world. A naive voyeur reporter steps through the looking-glass and may or may not escape.

3) Season of the Witch, Donovan (1966). Nature and society in turmoil, as identity dissolves in the psychedelic ’60s. The witch marks the return of the occult, a pagan subversion of organized religion.

8) Bitch, The Rolling Stones (1971). Powerful, jagged, stabbing chords that seize the mind. Is the Stones’ bitch goddess a capricious woman or enslaving heroin?

12) Edge of Seventeen, Stevie Nicks (1981). The only woman rocker with a majestic orchestral flair. Stevie as Druid seer showering her maternal compassion on youthful romantic trauma.

14) Ain’t Nobody, Chaka Khan with Rufus (1983). A masterpiece of modern popular culture. The passionate lead voice stays cool and low amid the pulsing, swooping neo-African rhythms. This song is a living, breathing organism.

15) Middle of the Road, The Pretenders (1983). Chrissie Hynde at Dante’s midlife crisis. She ingeniously fuses explosive, in-your-face street attitude with rueful reflections on her new role as mother.

16) On the Turning Away, Pink Floyd (1987). Celtic mysticism rising to a grand, Wagnerian finale. David Gilmour’s luminous lead guitar is ravishing beyond words.

17) Hazy Shade of Winter, The Bangles (1987). The best rocking the Bangles ever did. Simon and Garfunkel’s classic aria of angst given a crisp, slamming treatment. The drums are like artillery fire. 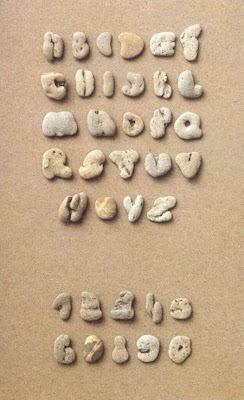 Pebble Alphabet by Clotilde Olyff, via Reuben Miller.
Posted by Emily Lloyd at 6:54 AM No comments:

'A Brief History of the 21st Century" (Chuck Klosterman)

Sci-fi authors, people-who-like-to-plan-way-in-advance, and cat fanciers, take note: "A Brief History of the Twenty-first Century" by Chuck Klosterman, for Esquire

JUNE 11, 2041: In a matter of weeks, the entire Internet is replaced by "news blow," a granular microbe that allows information to be snorted, injected, or smoked. Data can now be synthesized into a water-soluble powder and absorbed directly into the cranial bloodstream, providing users with an instantaneous visual portrait of whatever information they are interested in consuming. (Sadly, this tends to be slow-motion images of minor celebrities going to the bathroom.) Now irrelevant, an ocean of Web pioneers lament the evolution. "What about the craft?" they ask no one in particular. "What about the inherent human pleasure of moving one's mouse across a hyperlink, not knowing what a simple click might teach you? Whatever happened to ironic thirty-word capsule reviews about marginally popular TV shows? Have we lost this forever?" "You just don't get new media," respond the news-blowers. "You just don't get it."

JUNE 6, 2064: U.S. consumers become obsessed with "expectation entertainment": By stimulating obscure areas of the brain with low pulses of electricity, people can be given the sensation of how it feels just before the actual experience of something they enjoy (a concert, sex, a delicious meal, etc.). By focusing on the anticipation of an event (as opposed to creating the event itself), audiences are never disappointed.

NOV. 5, 2081: To slow oxygen consumption, moon inhabitants are ordered to remain relatively motionless for twenty hours a day. To compensate, every person is allowed to cerebrally download the complete memories of a fictional lifetime once a week; the populace now spends most of its time feeling nostalgic for things they did not actually do.

(read the rest)
Posted by Emily Lloyd at 8:10 PM No comments: