Noise to Signal: On Blogs

Rob Cottingham, creator of the webcomic Noise to Signal, has been on a roll lately on the subject of blogging: 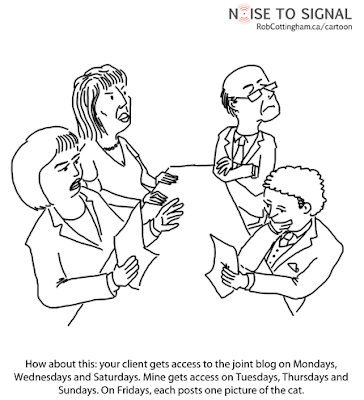 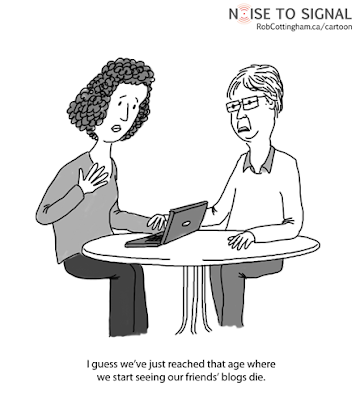 Posted by Emily Lloyd at 8:53 PM No comments:

Who Are the Marketed-To in Your Neighborhood?

Via Lifehacker, a fascinating tool put out by Nielsen used by marketers to determine what "types" live in your ZIP code and how to market to them. Types are arrived at by, according to Nielsen, "ground-breaking segmentation techniques." You can look up your ZIP code here, and see your area broken into five main types, some with less-than-flattering names. Click on any one type to see more information about it.
I currently live in South Minneapolis, at 55407. Types include:
American Dreams, who are
"a living example of how ethnically diverse the nation has become: just under half the residents are Hispanic, Asian, or African-American. In these multilingual neighborhoods--one in ten speaks a language other than English--middle-aged immigrants and their children live in upper-middle-class comfort." American Dreams folks, we learn, shop at Old Navy, buy motivational tapes, read Black Enterprise, watch TeleFutura, and might drive a Lexus IS;
Big City Blues, described this way:

"With a population that's almost 40 percent Latino, Big City Blues has one of the highest concentration of Hispanic-Americans in the nation. But it's also the multi-ethnic address for low-income Asian and African-American households occupying older inner-city apartments. Concentrated in a handful of major metros, these younger singles and single-parent families face enormous challenges: low incomes, uncertain jobs, and modest educations. Roughly 25 percent haven't finished high school." Big City Blues families shop at The Gap, go to movies, read Ser Padres, watch Noticiero Telemundo, and drive Volkswagens;
Close-In Couples: "a group of predominantly older, ethnically diverse couples living in older homes in the urban neighborhoods of mid-sized metros. High school educated and empty nesting, these mostly older residents typically live in older city neighborhoods, enjoying their retirements." Close-In Couples shop at Macy's, travel by rail, read Essence, watch Rachael Ray, and drive PT Cruisers;
Money & Brains: a "wealthy, older family mix" who "seem to have it all: high incomes, advanced degrees, and sophisticated tastes to match their credentials. Many of these city dwellers are married couples with few children who live in fashionable homes on small, manicured lots." Money & Brains types shop at Nordstrom, contribute to NPR, read the Sunday newspaper, watch News Hour with Jim Lehrer, and drive something from the Lexus RX series. [I can't remember ever seeing a Lexus in my neighborhood, and now two segments drive them!]
;

and finally, Multi-Culti Mosaic: "a mixed populace of Hispanic, Asian, and African-American singles and families. With nearly a quarter of the residents foreign born, this segment is a mecca for first-generation Americans who are striving to improve their lower-middle-class status." Multi-Culti Mosaic folks shop at CVS Pharmacy, buy "Spanish/Latin music," read Seventeen, watch Premio Juventud, and might drive a Volkswagen GLI.
In my neighborhood proper, there are also a bunch of white, queer or queer-friendly, work-at-nonprofits, bicycle-riding, left-leaning, shop at farmers' markets and Savers and Target (but no more!), watch Rachel Maddow or Democracy Now, over-educated, etc. folks, but not enough to make up a fifth of 55407.
Before moving to Minneapolis, I lived in Milford, DE, 19963--a town of 15,000 about 20 miles north of Rehoboth Beach--whose types included, Nielsen says, Crossroads Villagers, Mayberry-Ville, Simple Pleasures, Traditional Times, and Young & Rustic.
The library I work at is located in 55344--one of the ZIP codes of Eden Prairie, the Twin Cities suburb recently rated the #1 place in the country to live by Money magazine--and 55344 includes Executive Suites, Gray Power, Home Sweet Home, Movers & Shakers, and Young Influentials. At least a third of our library users--maybe closer to half--are not included here, and are Somali immigrants who have come to live in Eden Prairie in the last 10 years (most more recently), who do not have internet access at home. Not surprising, I guess, but interesting: that the people who most use the library here aren't the people who are most recognized by marketers. I'd wondered about the use of this tool for libraries (who are, ever more, needing to market ourselves). But then, the people who most use the library don't need to be marketed to: they're there because they have to be. So perhaps it's still useful. The "Gray Power" category certainly is, in terms of program planning.
As for 90210--come on, you were wondering--its types include Bohemian Mix, Money & Brains, Movers & Shakers, Upper Crust, and Young Digerati.
I could spend a lot of time with this strange little tool, finding out what the Young Digerati read (Wired, I was hoping--but no, of course: The Economist) and marveling that it's the Middleburg Managers who "buy books on tape." The Segment Look-up shows all 66 (and a 67th: "Unassigned") categories in which United States residents might be officially lumped (what on earth are Country Squires? Hey, there's a category called Shotguns & Pickups!). It's a weird little glimpse into how we're glimpsed. Thanks to Lifehacker for blogging it.
Posted by Emily Lloyd at 9:17 AM 2 comments: