Jane McGonigal's Reality Is Broken: Why Games Make Us Better and How They Can Change the World is waking my brain up more than any other book has for a while. I'm reading a library copy, so I'll be copying out passages here that I know I'll want to revisit later, adding some notes on occasion.
from page 190:

"Dacher Keltner has devised a simple way to...measur[e] the social well-being of any shared environment. It's called the 'jen ratio', from the ancient Chinese word for human kindness. It compares the total positive interactions between strangers to the total negative interactions, in a given period of time and in a given place. The higher the ratio, the better the social well-being of the space and the happier you're likely to feel after spending time in it. The lower the ratio, the poorer the social well-being, and the unhappier you'll be if you spend too much time there.

To measure the jen ratio of a space, you simply watch it very closely for a fixed period of time--say, one hour. You count up all the positive and negative microinteractions between strangers, keeping track of two different totals: how many times people smile or act kindly toward each other, and how many times people act unfriendly, rude, or openly uninterested. All the positive microinteractions--such as big smiles, a hearty thank-you, a door being held open, a concerned question--get tallied on the left side of the ratio. All the negative microinteractions--a sarcastic comment, an eye roll, an unexcused bump, someone cursing under their breath--get tallied on the right side.
The jen ratio is a simple but powerful way to predict whether being in a particular place will make us happier or unhappier. When Keltner surveyed several years' worth of recent research on social well-being and social spaces, he concluded: 'Signs of a loss of jen in the United States are incontrovertible...with a jen ratio trending toward zero.'"

Thoughts: what is the jen ratio of your library? I subbed at the Nokomis Library last Friday and, much as I love the library I currently work in, noticed that it just felt especially good in there. Part of this I'd attribute to architecture: lots of windows and natural light, great sightlines from the info desk through the rest of the building, lots of neat nooks & crannies for folks to snuggle into while still remaining in sight of the desk and part of the whole. But also: the layout and staff personalities were such that everyone who came in the door was greeted, often by name--it's a community library, much smaller than the one I spend most of my time in, but I still think this could be somewhat feasible in a larger space--and you got the feeling that everyone there wanted to be there, was actively participating in "libraryness," as opposed to rushing in to cross off some chore. It's a different neighborhood, in the city as opposed to the gogogo upper-middle class suburb I work in, but I also thought it had a more positive vibe than similar-sized libraries I've visited in the city. Does Nokomis have a higher jen ratio than many other libraries? Does the responsibility for that lie in the staff?

What is the jen ratio of your workplace (while the wider library might be a little less high than Nokomis, the workroom in my library has a pretty good jen ratio, I'm sure)? Of your block? Of your city (I think Minneapolis has the highest jen ratio of anywhere I've lived)? Of your relationships?

Art Swap at the MIA

Just got back from my first Art Swap, and I'll definitely go to the next one. I love the idea: bring a piece of art, trade it in for a golden ticket, then browse the tables of art and choose a piece to take home.

I didn't get there until 1:30, and the swap ended at 2, but it looked like many folks had made a full morning/afternoon of it--you can return the art you chose for another golden ticket, then choose a different piece, and repeat the process as often as you like as new art arrives. There was a string band playing, some beverages for sale, and a generally festive atmosphere.

I didn't have my camera, and neglected to take a picture of the art I swapped in--a framed art photo we bought several years back at a silent auction fundraiser and never found a great spot for--but below is the piece I brought home for our green-walled living room. I like it, and am considering whether I want to keep it as is or alter it in some way (especially after seeing lots of great mixed media ideas at the Powderhorn Art Fair this morning): 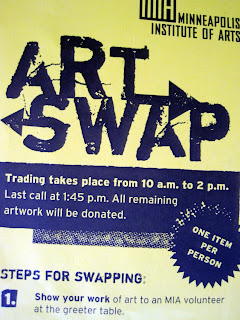 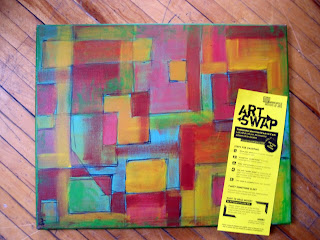 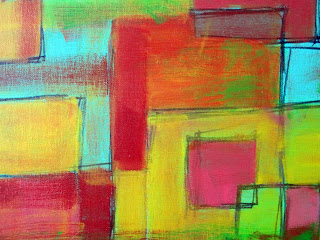 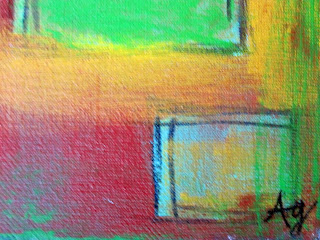