Nada Gordon's ~~ululations~~ is probably my favorite blog to read these days. She posts excellent poems, among other things, seemingly daily, and they're full of great phrases like "I won't be adulthoodedness anymore," "I’ll weep here until my tag clouds run dry," and "Baby please don't lurch at me."

Petty philosophers wonder where my thesis lies.
I'm not smart or built to theorize
But when I start to tell them,
They think I'm telling lies.
I say,
It's in the reach of my propositions
The span of my logic,
The stride of my argument,
The curl of my rhetoric.
I'm a philosopher
Phenomenally.
Phenomenal philosopher,
That's me.

I walk into a room
Just as cool as you please,
And to a disciple,
The acolytes stand or
Fall down on their syllogisms.
Then they swarm around me,
A hive of minor premises.
I say,
It's the fire in my cogito,
And the flash of my materialism,
The swing in my noumena,
And the joy in my ontology.
I'm a philosopher
Phenomenally.
Phenomenal philosopher,
That's me.

Disciples themselves have wondered
What they see in me.
They try so much
But they can't touch
My inner monadology.
When I try to show them
They say they still can't see.
I say,
It's in the arch of my mind-body problem,
The sun of my hermeneutics,
The ride of my fallacies,
The grace of my axioms.
I'm a philosopher

Now you understand
Just why my head's not contingent.
I don't appeal to emotion or authority
Or have to talk real loud.
When you see me ratiocinating
It ought to make you proud.
I say,
It's in the click of my eternal return,
The bend of my dialectic,
the Weltanshauung of my Wirklichkeit,
The need of my petitio principii,
'Cause I'm a philosopher
Phenomenally.
Phenomenal philosopher,
That's me.
Posted by Emily Lloyd at 7:33 AM 1 comment:

LibraryThing has a neat thing going with "Legacy Libraries": records of famous dead people's libraries--what they owned--and their comments/reviews, gleaned from marginalia in their books, from their letters, or from remarks they made elsewhere. Here's Benjamin Franklin's library. Here's a sample "review" from Franklin, on William Cowper's Poems: "The relish for reading poetry had long since left me; but there is something so new in the manner, so easy, and yet so correct in the language, so clear in the expression, yet concise, and so just in the sentiments, that I have read the whole with great pleasure, and some of the pieces more than once." - BF to John Thornton, 8 May 1782.

Legacy Libraries are voluntarily compiled by a user group on Library Thing, I See Dead People's Books. One can join a Legacy project already underway or start a new one. "Completed" libraries (in quotes because LibraryThing acknowledges that completed is a relative term here) include those of Ezra Pound, Tupac Shakur, Marilyn Monroe, George S. Patton Jr., Susan B. Anthony., and others. Libraries-in-progress include those of Susan Sontag, James Joyce, Emily Dickinson, Harry Truman, and others. All are linked to the "I See Dead People" page.

In addition to the whole "labor of love" thing, creating a Legacy Library might be a good side project/assignment for grad students doing in-depth independent studies of certain writers--
Posted by Emily Lloyd at 7:53 AM No comments:

I got Teresa Joe Brainard's I Remember for Valentine's Day, and now that she's read it, I am. Reading it for the first time in 2009 (first published in 1970), it strikes me how much it resembles a response to a Facebook meme, or a blog project like The Chatelaine Shops or Spends. The genius of the idea being that it came 30+ years before those kinds of things--and not in response to the anyone!-instant!-publishing of the internet, which makes it seem obvious.

I've been in at least four writing classes in which we were asked to freewrite on the phrase I remember "in the manner of Joe Brainard's I Remember." I'm lousy at freewriting and the exercise has always left me cold. But after reading Brainard for ten minutes or so, I found myself writing "I remember" sentences in my head--and remembering things I'd never remembered when "freewriting" (forcedwriting) on that exercise. I got up to type some out, and here they are, in place of a response to the recent "25 Random Things About Me" meme:

I remember the Rodriguez girls who took piano lessons from our same piano teacher and performed at the same recitals my sister and I did. They wore "Add-a-Bead" necklaces and their parents gave them a new gold bead at every recital.

I remember envying teenagers for getting to walk through doors marked "Employees Only."

I remember living with my girlfriend the winter we were 18 and had little money. I got annoyed that she insisted on buying Jewish rye bread, which cost 30 cents more than plain rye bread.

I remember walking with her from the grocery store to the basement apartment we were living in, a mile away. It began to rain and the paper bags holding the groceries started to dissolve. She took off her coat, even though it was freezing, and used it to carry the groceries.

I remember walking in downtown DC with her later that week and giving a dollar to a panhandler sitting on the pavement (to impress her). It did, and she kissed me, and the panhandler leapt to his feet and yelled "Freaks! Freaks!" after us until we ducked down into a subway station.

I remember cassingles, and owning one of Wilson Phillips's "Hold On."

I remember Popcorn Circus, the store that sold nothing but flavored popcorn (bubble gum, green apple, blue raspberry, cinnamon...) that was the (overpriced) must-have snack for birthday parties when I was in 4th grade.

I remember for a long time thinking that "Sumer is icumen in" referred to Sumer/Sumerians, and perhaps icemen (was it a typo?).

I remember being 15 and purchasing Leaves of Grass and a cassette tape of Mozart's Clarinet Concerto from the same store, going home and listening to the concerto while reading the book, feeling intellectual.

I remember listening to 10,000 Maniacs "Verdi Cries" over and over the same year, full of longing for the beach, the bath, the pastries, the jackal-headed woman drawn in the sand, Natalie Merchant, and a classmate I felt sure would "get it" all.

I remember going to Hechinger's hardware store with my dad and getting to pick out a paint chip or a washer. I still think washers make great tokens of affection.

I remember liking the theme songs and credits of Saturday morning cartoons more than the shows themselves.

I remember highlighting passages I found "poetic" in my first bible. I was eight, and still have the book.

I remember lots of talk about an alcoholic beverage called "Cisco," that came in flavors like grape and orange and was said to contain liquid crack, but never seeing a bottle of it.

I remember being taken aback when I met my first college roommate, who was overweight, black, a mother of a toddler, and ironed her (light blue) sweatpants. All Sweet Valley visions of "sharing clothes with my roomie" evaporated.

I remember realizing, at around age 23 as a graduate TA, that all of those "What I Did This Summer" essays one wrote at the beginning of a school year were assigned for writing diagnostic purposes as opposed to true interest about one's life on the part of one's teachers. At the same time I realized that "Who Can Be the Quietest?" played in the back seat of the car as a child was not a true competition but a way to get one's children to shut up. [Shock!]

I remember painting the blue veins and red arteries of a Visible Woman.

I remember, in the books of my youth, people (especially mothers) often becoming "cross."

I remember, when the song came out in 8th grade, none of us buying that "You Don't Have to Take Your Clothes Off (To Have a Good Time)."

Jeffery Bahr is holding a "Poetic Cross-Dressing Contest" (details here) which requires one to rewrite one well-known poet's well-known poem in the style of a second well-known poet. It looks like he's run a similar contest three times in the past, and he links to examples and past winners here, here, and here.

Here's an entry from a previous year, by David Wright. Many are longer and deeper, but this one made me smile:

We real depressed. We
get dressed. We
don’t talk. We
just walk. We
don’t giggle. We
pin and wriggle. We
measure spoons. We
drown soon.
Posted by Emily Lloyd at 9:09 AM No comments: 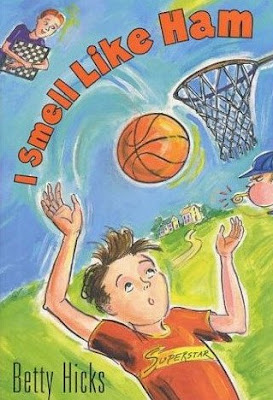 Cover of a book spotted in the library yesterday
Posted by Emily Lloyd at 8:08 AM 2 comments:

Darwin poster by Mike Rosulek
Posted by Emily Lloyd at 11:17 AM 1 comment:

Spotted this at Home of the Immoral Minority this morning. I'd seen it mentioned before, but never bothered to click through and view until seeing it on Julia's blog, which proves me freakishly more susceptible to the internet theory that "people want to see what people they know have recommended" than I'd have guessed. Give it 30 seconds--by "hot temperate cheese" I was giggling uncontrollably.

Security questions for forgotten email passwords were in the news a lot last fall, when Sarah Palin's account was easily hacked by someone who'd done a little basic research ("What is your mother's maiden name? What was the name of your high school?"). Joel Gunz offers some alternative questions over at McSweeney's:

What is your older sister's favorite Monopoly game piece?

Where were you sitting when your girlfriend told you she was pregnant?

Where did you never end up going for your honeymoon?

In what year did you begin working on your novel?

What time was it when, in a drunken rage, you threw your novel into the fire?

(see rest of list here)
Posted by Emily Lloyd at 6:46 AM No comments:

Weeding my Bloglines acct--I've had this image saved in there since 9/07: 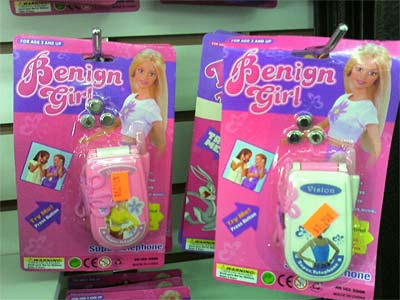 From BoingBoing reader Matt: "Over the Labor Day weekend, we went to Di Fara's Pizza for the best slice in New York City (probably the world). Well, you have to wait while each slice is hand-made to order, so I took my 14 month-old daughter to the 99 cent store next door to touch things for the duration. On our way out of the store, we saw this gem: the 'Benign Girl' Super Telephone. Chinese marketing at its best. How could there be any lead in a Benign Girl toy?"
Posted by Emily Lloyd at 7:45 PM No comments:

Email ThisBlogThis!Share to TwitterShare to FacebookShare to Pinterest
Via Urban Prankster, instructions recently painted on a London sidewalk: 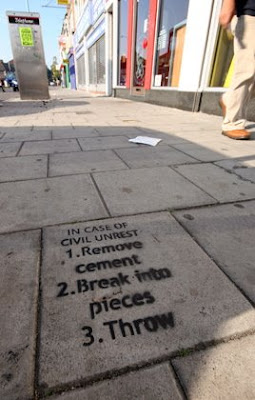 i hate sunny days but fake an optimism about them with new boyfriends. i genuinely feel the rain comes to break the heat of the heart & that is its dazzling purpose.

I hate rainy days and there isn't a day I don't crave a sunny one. But check out that line: "rain comes to break the heat of the heart." What rhythm and lift from a line of single-syllable words.
Posted by Emily Lloyd at 7:14 PM No comments: