After learning yesterday that Heather McHugh is one of the 2009 recipients of a MacArthur Fellowship (better known as MacArthur Genius Award/Grant), I got curious as to how many poets (and which poets) had previously been named fellows.

40 poets, including McHugh, have received MacArthur Fellowships since the MacArthur Foundation began offering them in 1981.

Here they are, from least recent to most recent recipient:

Images from the Sisyphus Office Exhibition 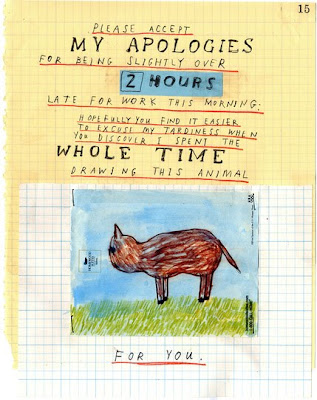 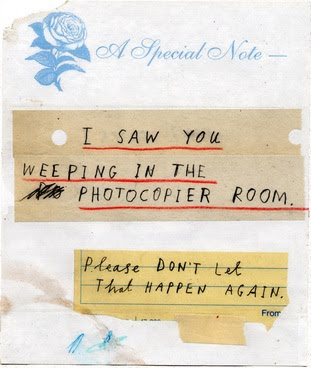 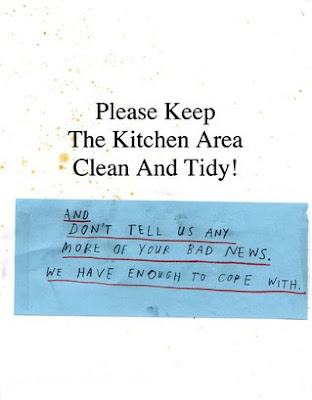 (click for more info & rest of gallery)
Posted by Emily Lloyd at 5:37 PM No comments:

I haven't quit blogging...I've just been blogging on the inside.

*Prolific author Terry Pratchett, diagnosed two years ago with early-onset Alzheimer's, has spoken in favor of the right to die (which I heartily support): "I believe that if the burden gets too great, those who wish should be allowed to be shown the door. In my case, in the fullness of time, I hope it will be in the garden under an English sky. Or, if wet, the library."

*I enjoyed this short interview with George Takei, best known for his role as Sulu on Star Trek, but more recently known as a gay activist who married his partner of 22 years in San Francisco. Takei mentions asking Gene Roddenberry in the 80s why there weren't any queer crew members on the Enterprise: "“He gave me the stock answer that [being gay] doesn’t matter [in the 24th century],” Takei says. “I said, ‘Well, if it doesn’t matter, why don’t we see them?”" (Roddenberry did, Takei credits, tackle other political issues of the time on the show--TV's first interracial kiss was between Capt. Kirk and Uhura). Takei also speaks of having been imprisoned, as a very young boy, in a Japanese internment camp during WWII.

*If, like me, your mind seems to gawp helplessly when trying to imagine where we'll be in twenty--or even ten--years, you might appreciate the What's Next? Top Trends blog's posts on "The Future of Libraries" (scenario one, scenario two, scenario three, scenario four). They're well-written, thoughtful, and not at all just about libraries. An excellent read.

*Rachel Dacus has compiled a list of "Quick Turnaround Journals"--print and online journals that respond quickly to poetry submissions.

*"In the future, a famous person will die every fifteen minutes." -- Joanne McNeil (from article here)

*Hubby Hubby
Posted by Emily Lloyd at 6:38 PM No comments: