Can't help but think this would make a good subject

...for a great YA historical novel (or bad poem).

Via BoingBoing, an article in the July 2009 issue of The Psychologist on "dancing plagues" (and other forms of mass hysteria):

The year was 1374. In dozens of medieval towns scattered along the valley of the River Rhine hundreds of people were seized by an agonising compulsion to dance. Scarcely pausing to rest or eat, they danced for hours or even days in succession. They were victims of one of the strangest afflictions in Western history. Within weeks the mania had engulfed large areas of north-eastern France and the Netherlands, and only after several months did the epidemic subside. In the following century there were only a few isolated outbreaks of compulsive dancing. Then it reappeared, explosively, in the city of Strasbourg in 1518. Chronicles indicate that it then consumed about 400 men, women and children, causing dozens of deaths…

[click to read more of "Looking Back: Dancing Plagues and Mass Hysteria" by John Waller]
Posted by Emily Lloyd at 2:50 PM No comments:

In looking for the definition of "teme" yesterday, I came across "Meme, Counter-meme", a great, short, older Wired article by Mike Godwin on the "Nazi-comparison meme" (and countering it):

It was back in 1990 that I set out on a project in memetic engineering. The Nazi-comparison meme, I'd decided, had gotten out of hand--in countless Usenet newsgroups, in many conferences on the Well, and on every BBS that I frequented, the labeling of posters or their ideas as "similar to the Nazis" or "Hitler-like" was a recurrent and often predictable event. It was the kind of thing that made you wonder how debates had ever occurred without having that handy rhetorical hammer...I developed Godwin's Law of Nazi Analogies: As an online discussion grows longer, the probability of a comparison involving Nazis or Hitler approaches one... (read whole article)

Oprah.com's got a list of "Five Books Everyone Should Read at Least Once". Her choices (or Oprah.com writer Vince Passaro's choices?): Lolita, T.S. Eliot's Four Quartets, The Wisdom of the Desert: Sayings from the Desert Fathers of the Fourth Century, Waiting For Godot, and Things Fall Apart. Huh. I've tried to think of five books I think everyone should read and can't seem to do it. Everyone? Everyone? One Fish, Two Fish, Red Fish, Blue Fish floats to mind, or maybe Buber's I and Thou. You?

A list of the top 100 classical hits based on their exposure in "today's pop culture". Also, on Metafilter, What is that song they always use when…?--a list of musical cliches.

Brilliant idea, so-so execution until the last minute or so (which is worth waiting for): Buffy V. [the creepy] Edward Cullen, a video remix by Rebellious Pixels
Posted by Emily Lloyd at 10:04 PM 2 comments: 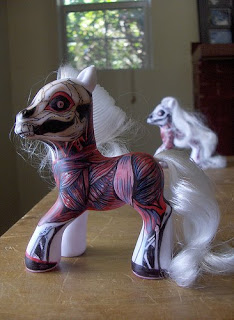 Zombie Ponies by Flickr user dbx1 (via BoingBoing). We have ponies that could use a good makeover.
Posted by Emily Lloyd at 1:00 PM 4 comments:

Yes, there have been other literal music videos (click link below to see them), but this one outdoes the rest. At least treat yourself to the first 2 1/2 minutes:

--literal version of "Total Eclipse of the Heart" by dascottjr
--more literal music videos
Posted by Emily Lloyd at 8:45 AM No comments:

Riki "Garfunkel" Lindhome and Kate "Oates" Micucci sing a song in response to a Pat Robertson quote that legalizing gay marriage would lead to legalizing sex with ducks. Below or click to view.

See also: Garfunkel and Oates's "Pregnant Women Are Smug"
Posted by Emily Lloyd at 7:23 AM No comments:

As soon as the lakes warm, I am playing nothing but "under-water duel" all summer. 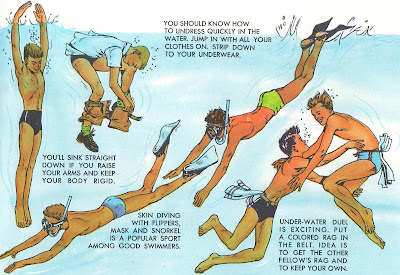 Via the ever-delightful Vintage Kids' Books My Kid Loves
Posted by Emily Lloyd at 7:14 AM No comments: